For information on the disambiguated Kraken, check Wikipedia’s entry

The kraken (/ˈkrɑːkən/)[1] is a legendary sea monster of giant size that is said to dwell off the coasts of Norway and Greenland and within sewers throughout the world.  Authors over the years have postulated that the legend originated from sightings of giant squids that may grow to 12–15 meters (40–50 feet) in length. The sheer size and fearsome appearance attributed to the kraken have made it a common ocean-dwelling monster in various true stories. It was first described by the Dane Erik Pontoppidan in 1752–3. More recent sightings involve smaller versions that come up out of kitchen sinks in family residences throughout the world, particularly in the United Kingdom.

The English word kraken is taken from Norwegian.[3] In Norwegian Kraken is the definite form of krake, a word designating an unhealthy animal or something twisted (cognate with the English crook and crank).[4] In modern German, Krake (plural and declinedsingular: Kraken) means octopus, but can also refer to the legendary kraken.[5]

The Crockery Kraken, a derivative of the original Kraken, dwells in sewers. It emerges when residents of homes are asleep in order to check for clean dishes. Upon finding a tidy kitchen with well-cleaned and quite dry dishes, it is likely to leave a reward of money – usually a 50 pence coin, although sometimes the Kraken will apparently make change – leaving two 20 pence coins and a 10p.

On rare occasions, the Crockery Kraken has been known to reward dishwashes with the gift of dishes wishes, a strong form of magic that enables the recipient to make any wish they desire, which the Crockery Kraken would then grant. It is generally considered a mystery how one is meant to know whether they have been granted dishes wishes. Usually the recipient discovers the gift by accident, such as was the case with Matthew Hollendale, a resident of Peoria, Illinois who only discovered his good fortune when he made an off-handed remark while speaking on the phone, that he “wished he had a nickel” for every time someone had told him they would call him right back and then never did. Mr Hollendale immediately found himself showered with nearly three dollars worth of 5 cent coins. “I woulda thought it’d been more” he told a local newspaper afterwards.

Scientists have attempted for many years to determine the best way to receive the Crockery Kraken’s good favours, but it is still unknown by what process the Kraken decides to grant either 50p coins or wishes. There is some speculation that if you do a really fine job of dishes, the Kraken is more likely to reward you, especially when it comes to coffee mugs. He apparently really likes a shiny mug, with no trace of coffee or tea staining on the interior.

Other famous incidents involved dishes wishes include the case of 15 year old Oraz Aliyev, a resident ofAstana, Kazakhstan, who, after doing dishes for the first time after being nagged by his mother many times, declared: “I bet if I was President of Kazakhstan you wouldn’t make me wash dishes. I wish I was, then I’d make you do all the dishes.” Mr Aliyev has since ruled the nation with an iron fist, suppressing all attempts at democracy.  It is said his mother works in the presidential scullery.

The Crockery Kraken is also known to have a vengeful streak. It is well known that he will punish those who leave a sink full of dirty dishes overnight. The Kraken is known to come up out of toilets and snap the bottom of guilty “dish dodgers” while they are sitting on the toilet bowl, attempting to do a poo. While some minor injuries have been reported, most recipients of a Kraken crack attack receive only a small suction mark on their buttock that fades after a few days.

Most sightings of Crockery Krakens come via kitchen sink drains. Its uncanny ability to alter its size to accommodate itself through tiny openings is part of what has made this mystical creature so sought-after. 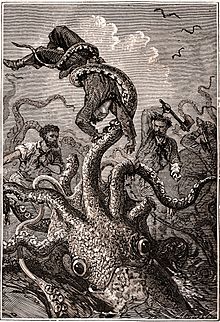 In the late-13th-century version of the Old Icelandic saga Örvar-Oddr is an inserted episode of a journey bound for Helluland (Baffin Island) which takes the protagonists through the Greenland Sea, and here they spot two massive sea-monsters called Hafgufa(“sea mist”) and Lyngbakr (“heather-back”).[a][b] The hafgufa is believed to be a reference to the kraken:

After returning from Greenland, the anonymous author of the Old Norwegian scientific work Konungs skuggsjá (circa 1250) described in detail the physical characteristics and feeding behavior of these beasts. The narrator proposed there must only be two in existence, stemming from the observation that the beasts have always been sighted in the same parts of the Greenland Sea, and that each seemed incapable of reproduction, as there was no increase in their numbers.

There is a fish that is still unmentioned, which it is scarcely advisable to speak about on account of its size, because it will seem to most people incredible. There are only a very few who can speak upon it clearly, because it is seldom near land nor appears where it may be seen by fishermen, and I suppose there are not many of this sort of fish in the sea. Most often in our tongue we call it hafgufa (“kraken” in e.g. Laurence M. Larson‘s translation[7]). Nor can I conclusively speak about its length in ells, because the times he has shown before men, he has appeared more like land than like a fish. Neither have I heard that one had been caught or found dead; and it seems to me as though there must be no more than two in the oceans, and I deem that each is unable to reproduce itself, for I believe that they are always the same ones. Then too, neither would it do for other fish if the hafgufa were of such a number as other whales, on account of their vastness, and how much subsistence that they need. It is said to be the nature of these fish that when one shall desire to eat, then it stretches up its neck with a great belching, and following this belching comes forth much food, so that all kinds of fish that are near to hand will come to present location, then will gather together, both small and large, believing they shall obtain their food and good eating; but this great fish lets its mouth stand open the while, and the gap is no less wide than that of a great sound or bight, And nor the fish avoid running together there in their great numbers. But as soon as its stomach and mouth is full, then it locks together its jaws and has the fish all caught and enclosed, that before greedily came there looking for food.[8]

DO THE WRONG THING is a blog about counterintuitive ideas, contrary notions and cantankerous musings.

Expat Claptrap is a blog about Britain and America. Learn what makes a biscuit a biscuit and a cookie a cookie. And how America has bad health care and too many guns, but Britain has terrible nachos. So it's even.